Belt & Road Initiative (BRI): Belted on a road to debt?

The Second Belt and Road Forum for International Cooperation was held in Beijing, China last month. This high-powered annual event brought together hundreds of senior leaders from countries across the globe with thirty-seven (37) countries represented by heads of state and government, including Russia’s President Vladimir Putin, Italy’s Prime Minister Giuseppe Conte, and Pakistan’s Prime Minister Imran Khan. While many in China celebrated the success of bringing together this array of Belt and Road Initiative (BRI) partner nations, some important regional powers, including Turkey and India, cited economic and political concerns about BRI as grounds for not attending. China continues to push ahead on the mammoth ‘project of the century’[i] to revive and expand the Silk Route, striking investment deals of unparalleled magnitude worth billions of dollars with partner countries.

As the BRI locomotive chugs along, accusations of “economic colonialization” through the laying of “debt traps” enjoy growing attention in the mainstream global media. The narrative of a trade war with the US, and greater American insistence on smoothing out its trade deficit with China, only serves to enhance the strategic value of the BRI. Concerns in BRI partner countries about the economic burden of financing BRI projects through Chinese institutions however must not be ignored. It is through responsiveness to these critiques adequately that the BRI can fulfill its potential as a globally transformational transnational initiative.

BRI at a glance 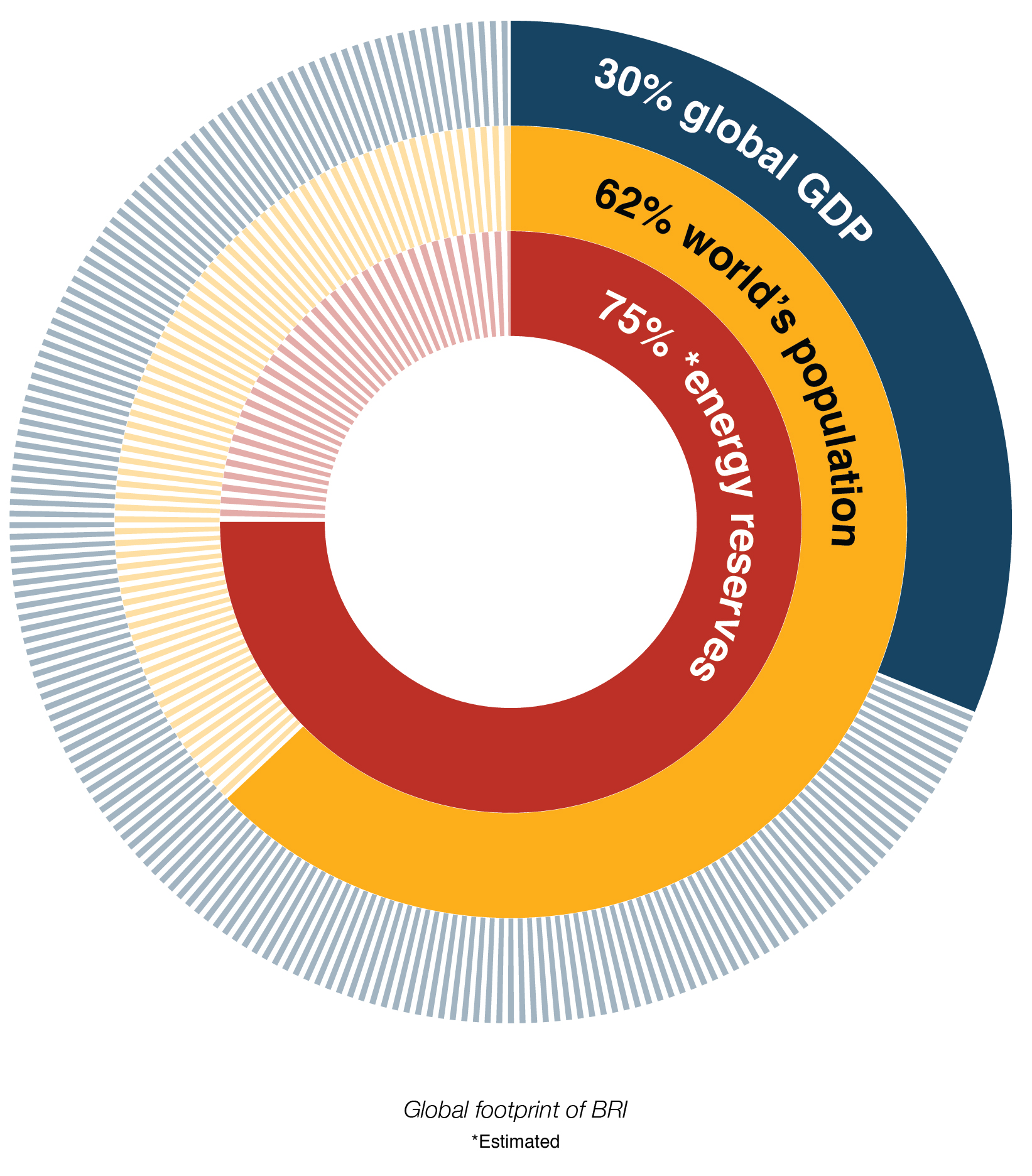 The BRI is a trans-continental, transnational mega plan conceived and laid out by China to consolidate its growing strength as a global economic driver of change, and more importantly, partner to smaller nations. The BRI covers sixty-eight (68) countries across Asia, Africa and Europe. The anticipated quantum of investment needed to help bring the overall BRI vision to fruition is expected to top USD 8 trillion, primarily spanning transport (land and sea), telecommunication and energy infrastructure[ii].

BRI countries constitute approximately 30% of global GDP, 62% of world’s population and 75% of the estimated energy reserves on the planet. The BRI aims to connect China to Central, South and South East Asia, the Gulf Cooperation Council (GCC) countries, North Africa and Europe through six main economic corridors.[iii] The expected impact of these inter and intra-continental corridors is to boost and improve cross-border trade, economic cooperation and integration.

Capital intensive projects being developed under the BRI require deep and steady funding. Many of the most eager BRI partner countries, also happen to be fiscally-challenged, and low-income economies. Most others are middle-income countries with sometimes, even more pressing constraints than those of low-income countries. These nations will be dependent on external financing for the timely and successful execution of BRI projects. One of the defining characteristics of BRI is the readiness of China’s financial institutions, offering sovereign and/or linked-to-sovereign funding to finance projects. Unlike the Marshall Plan, financial support under the BRI is through loans and not grants[v]. Hoping to stimulate economic growth through the corridors, BRI partners seem open to challenging the financial hegemony of multilaterals. Policy banks like the China Development Bank (CDB), Export-Import Bank of China (China Exim Bank) and Agriculture Development Bank of China (ADBC) among other institutions, aligned with the BRI vision, are committing to finance BRI, with over USD 440 billion already committed[vi] of which USD 90 billion has been directly invested in projects[vii]. At the BRI Forum in Beijing, over USD 64 billion worth of agreements were signed in just three days. 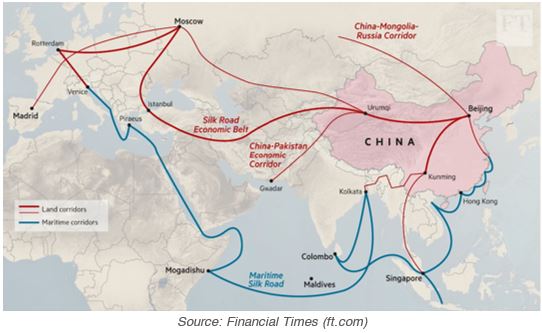 China has a natural interest in accruing primary (and allegedly, sometimes even monopolized) benefits from the BRI. With such unconstrained deployment of finances originating from the architects of BRI, it is only natural for there to be questions about the sustainability of the financing on offer. The financing agreements have largely been structured as bilateral transactions without the involvement of multilateral institutions and their corresponding economic assessment and monitoring frameworks — in short, a lot of the BRI project financing does not come with the conditionalities that World Bank, Asian Development Bank, African Development Bank, Inter-American Development Bank, and other multilateral financing sources come with.

Moreover, this financing is creating knock-on expansion of the financial sectors in BRI nations. Bilateral exchanges among financial institutions has led to the expansion of banking networks with eleven (11) Chinese banks operating branches in twenty-eight (28) BRI countries, whereas fifty (50) banks from twenty-two (22) BRI countries have started business in China[viii]. In addition to sovereign loans, financial instruments used for development of economic corridors also include concessional loans, commercial loans and equity investments. As an example, the China Pakistan Economic Corridor (CPEC), a flagship BRI investment, has USD 19 billion in investments to date of which over 60% is commercial lending and equity investments with no sovereign anchors.

Is it really debt-trap diplomacy?

Growing concerns around BRI, particularly from Western institutions, center on China using ‘debt-trap diplomacy’ to achieve its geopolitical and economic objectives of fashioning a parallel world order in which Beijing enjoys ascendancy. The anchoring concern is that heavy lending to developing economies (particularly in Africa) will eventually create pre-aligned domestic pressures to allow for increased Chinese involvement and influence. The 2nd Belt and Road Forum was held amidst such apprehensions where countries like Turkey have clearly voiced concerns about Beijing laying debt traps through BRI financing. There is no doubt that debt levels of countries investing in huge infrastructure projects will rise, and China is one of the major creditors for such investments. Projects like a high-speed rail in Lao PDR that will cost half the country’s GDP serve to further fuel such speculation[ix]. 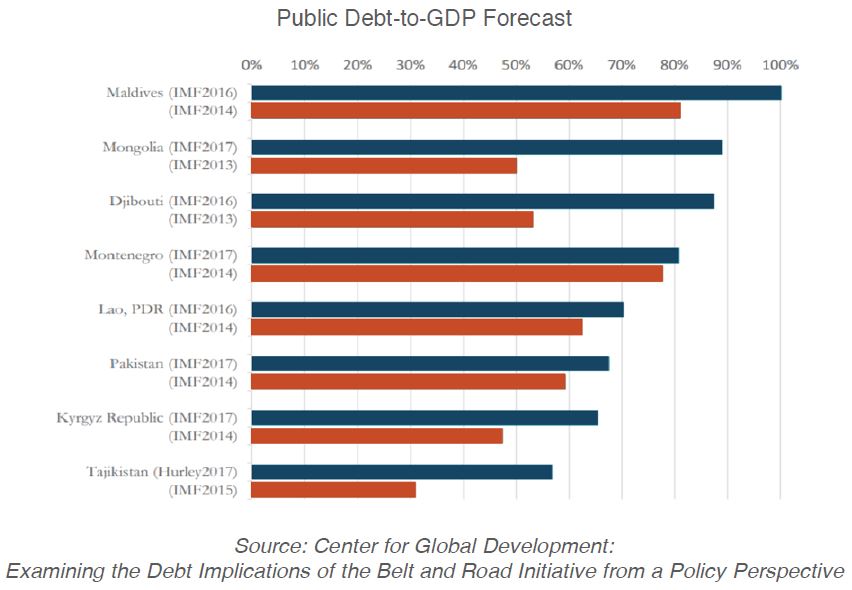 The Center for Global Development has analyzed the potential impact of BRI pipeline projects and associated debt levels of countries that may pose high risk[x]. Eight countries were classified as high risk: Djibouti, The Maldives, Lao PDR, Montenegro, Mongolia, Tajikistan, Kyrgyz Republic and Pakistan. These countries will face rising debt-to-GDP ratios in excess of 50%—which certainly merits concern.

It is likely that the unique macroeconomic conditions and boom-bust cycles in these eight countries may lead to higher than expected debt burdens. However, applying this as a general rule to all of the sixty-eight (68) participating BRI countries, is a stretch. Another concern among Western institutions is the use of multilateral agencies like the IMF to support countries that have ongoing credit arrangements with China. There too, are legitimate concerns about how BRI countries use the fiscal flexibility that China is helping afford to low-income countries, and the extent to which institutions like the IMF will eventually be on the hook to help deal with or manage.

Accusations of pursuing a debt-trap policy through BRI has triggered debate in academic and policy circles. In order to find merit to such claims, an analysis of China’s debt management outcomes with countries can be reviewed to understand the treatment granted to over- 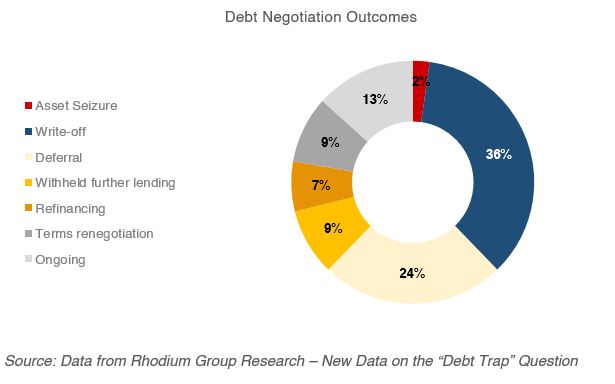 extended debtors. China’s takeover of the Sri Lankan port of Hambantota as part of a debt servicing swap is cited as the primary example of fears of asset seizure and control that can be potentially exercised by China over strategic infrastructure across continents. This, however, is just one rare example and often misunderstood. At the time of Hambantota port take-over, Sri Lanka’s external debt amounted to USD 46.5 billion of which China was owed less than 10%[xi]. The debt servicing issues very specific to Hambantota is what resulted in the strategic acquisition by China.

Research conducted by the Rhodium Group reviewed forty (40) cases of external debt renegotiations by China[xii]. The research concludes that while debt distress is common among countries receiving high levels of financing for rapid infrastructure expansion, asset seizures by China are an extremely rare occurrence. Despite being a creditor enjoying quite a strong position, negotiations have largely benefited borrowing countries with various treatments afforded to countries for restructuring or settling debt. Negotiations have often resulted in the extension of loans, the restructuring of terms and even wholesale re-financing. Interestingly, write-offs, both partial and full, have been the most common solution to debt problems in these negotiations. 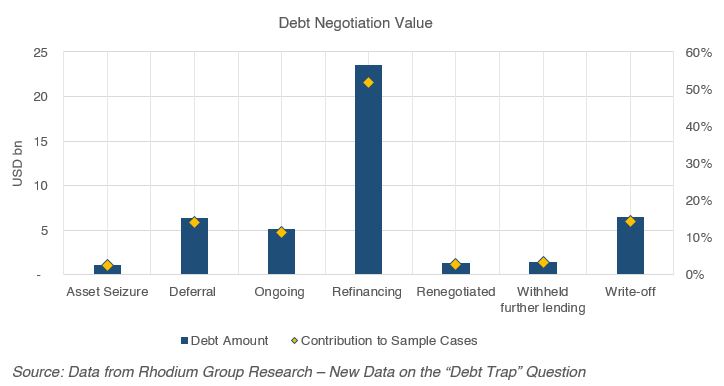 Using the Rhodium Group’s data and analysis (and reclassifying the Sri Lanka case as an occurrence of asset seizure for a conservative analysis — although it was eventually refinanced with some write-offs), some key trends emerge. First, 36% of debt servicing negotiations resulted in write-offs worth approximately USD 6.5 billion (which was the most common occurrence). Second, 7% of the debt arrangements having a value of USD 23.5 billion were refinanced, constituting 52% of total debt in the sample cases. It is important to note that these were initial findings of the study and empirical analysis is not predictive of future debt management treatments under BRI[1].

Research by the China Africa Research Initiative at Johns Hopkins shows that the IMF’s estimates of seventeen (17) low-income African countries in or at the brink of debt-distress were not because of China’s lending. China being the single largest creditor, for example in Chad or Mozambique, did not hold most of the debt. Other global banks and financial institutions held most of the debt which contributed more significantly to the debt burden of these countries[xiii].

To sum up, China’s interest in making the BRI a success through indigenous financing has fueled speculation of debt-traps caused by unsustainable debt financing. While the sustainability of infrastructure financing is critical for regional economic stability, there is little evidence that China is forcing countries into such crises. China continues to counter the anti-BRI narrative to keep partner countries engaged and invested. One reason for such speculation is also the lack of transparency around BRI financing. The IMF has repeatedly and explicitly questioned opaque lending and demanded more transparency from countries and Beijing to bridge information asymmetry around Chinese debt[xiv]. In the most recent case of Pakistan, details of debt arrangements with China were a major negotiation bottleneck[xv]. Making details of BRI projects more public would certainly help counter the debt-trap narrative. Additionally, developing a tailored economic assessment framework specifically for BRI would also support better lending practices so that risk profiles are mapped according to country, region and sector. This would improve the confidence of multilaterals and possibly support BRI countries in making more informed decisions. Better alignment with multilateral programmes in countries can help improve domestic public policy decisions with regards to economic priorities. 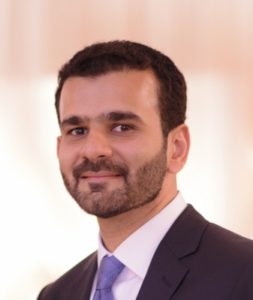 Umar Nadeem is a Fellow at Tabadlab. He has serviced governments, multilateral organizations and corporations on public policy and governance issues in Asia, Europe and Africa. His areas of expertise are data analytics, transparency and governance, service delivery, and digital government. He attended the Lahore University of Management Sciences for his undergraduate studies, and the University of Oxford for his graduate degree.

[i] Turkey stays away from China’s Belt and Road summit citing debt-trap diplomacy and Uighur concerns. (2019, April 25). Retrieved from https://intellinews.com/turkey-stays-away-from-china-s-belt-and-road-summit-citing-debt-trap-diplomacy-and-uighur-concerns-160249/

Disclaimer: The views and opinions expressed in this article are those of the authors and do not necessarily reflect the official policy or position of Tabadlab Private Limited 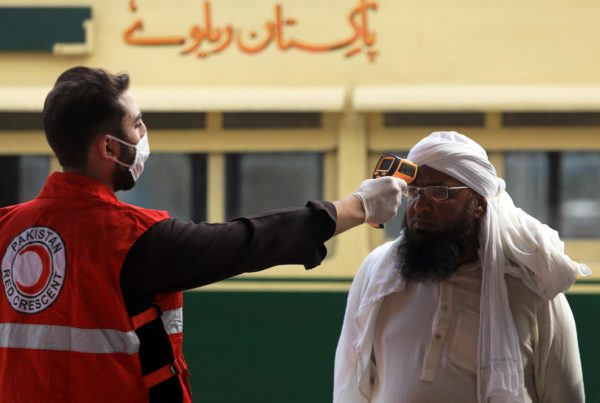 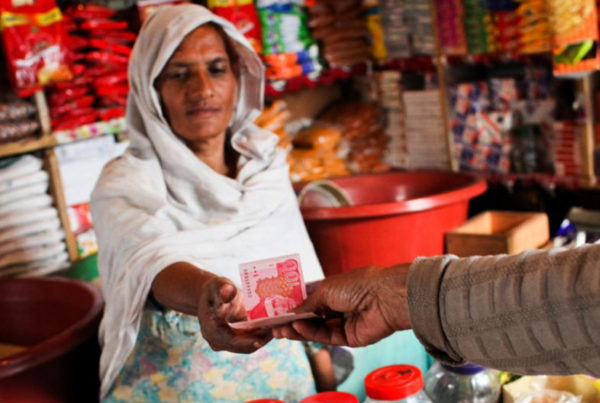 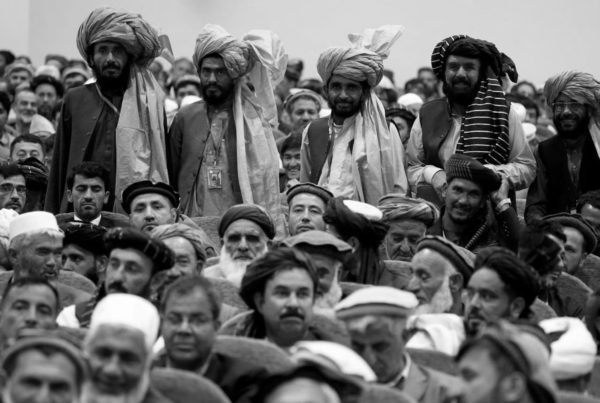